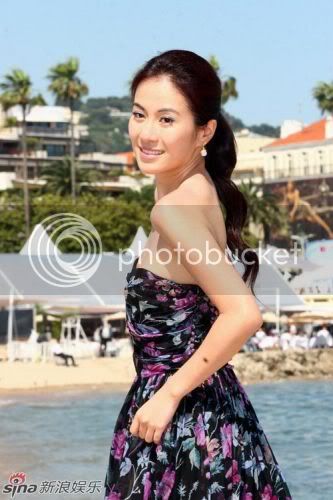 Female lead in Johnny To's 'Vengeance', Michelle Ye accepted an interview with Sina at France. Having the chance to come to Cannes for her first collaboration with To, it felt like summer vacation, her biggest dream is to watch movies. She was full of praises for the two male leads in the movie, Anthony Wong and Hallyday – "Anthony Wong is very trustworthy in and out of the movie, while Hallyday's green eyes is deep as an ocean, very refined, very romantic."

Michelle does not have much screen time in 'Vengeance', but the role she plays is in fact the key person to the success of Hallyday's revenge. She is pregnant and has a crowd of mixed-blood children with Anthony Wong. "This role is quite extreme at two ends, she is sometimes a normal mother, and at times a cold-blooded assassin, her past is unknown, it gives everyone the freedom of imagination."

Waking up early every morning to watch movie, all the best movies worldwide are available, can watch a lot of emotions and admiration.

It is much longer, Hallyday is a mega star who attracted a lot of attention, as though entire population was there.

I play Anthony Wong's wife, he have a lot of children. Anthony died in his efforts to help Hallyday revenge. I had to help him take care of Hallyday, and even accomplished his revenge.

This role is quite extreme at two ends, she is sometimes a normal mother, and at times a cold-blooded assassin, her past is unknown, it gives everyone the freedom of imagination.

Very grateful to Anthony Wong, he taught me a lot of my dialogues and scenes, he is an expert in movies, he really taught me word by word. In 'Vengeance', he is stylish, trustworthy, a lot said that they got to know him all over again through the movie.

Hallyday has a pair of ocean deep green eyes, his eyes contained too much, very refined and very romantic, most suitable for the role in the movie.

In my first collaboration with Johnny To, witnessing his manipulation and his competence as a director, I can only gasp in amazement.

'Vengeance' will have a sequel

Initially our movie ends with Hallyday murdering Simon Yam, but director realized that my chemistry with Hallyday was good, and used the scene before as the ending. Perhaps we may have a sequel, to tell the story between him and I.

Actually, every of Johnny To's movies does seem like it has sequel, cause it is filmed so, the roles seem to have more to go on, for example, Anthony Wong's role is named 'Ghost' in 'The Mission', 'Exiled' and 'Vengeance', Lam Suet's role being 'Fatso'

Her biggest dream is to watch all the 15 nominated movies, she has watched 5 up to now: I have seen the Japanese, England and States, and has yet watched the Mandarin, but we bumped into director Lee Ang on the premier night, the airing of their movie is clashing with our work time.