Johnny To, Tony Leung misunderstood to be 'squabbling' indirectly

19 May 2009 - Johnny To, Tony Leung misunderstood to be 'squabbling' indirectly

Johnny To, Tony Leung misunderstood to be 'squabbling' indirectly 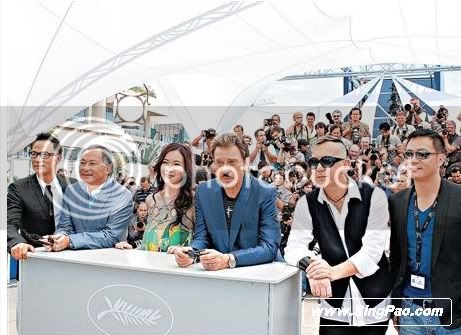 Johnny To was earlier on invited by France' government for their recognition of his productions in the movies industry. When he accepted an interview earlier on, he was innocently misunderstood to be 'squabbling' with Tony Leung indirectly.

Later on, Johnny To said: "I'm pleasantly surprised and happy to get this award, but I still have a long way to go, I still have to work hard. I love Hong Kong, I will continue to stay in Hong Kong in the days to come, film more good movies for everyone's pleasure."

Johnny To led his team to the premier night, his good friends, Lee Ang, Tony Leung and Shu qi were present to support. The movie won enthusiastic applause for as long as 8 minutes, where female lead, Michelle Ye was seen to be touched to tears. The Variety magazine highly appraised 'Vengeance' and Johnny To's style.

Foreign media however mistook Simon Yam to be Eddie Cheung. Mainland websites reported that Tony Leung, in an interview admitted that Hong Kong movie industry is entering a dry spell, facing lots of obstacles continuously, causing To's dissatisfaction, and criticized Tony Leung saying: "Why did he say so? Hong Kong movie industry will not die, he is not a director…" However, To responded to reporters through his spokesperson, denying: "Yes, I accepted interview with reporters, but that is not his point, he only wants to have a good scripts and good director, only then he can groom successful actors!" Tony Leung said: "Everyone's aim is to do their best for Hong Kong movies! As long as we achieve that aim, I won't mind whatever is said."