Hong Kong artist, Michelle Ye, who has the label of 'Rumor Queen' and Mainland's youthful idol star Sun Fei Fei last night were present at Fuzhou's mall. They are present this time to warm up for the series 'Jiao Yi Sheng Ma Ma' which will be broadcasted soon. Besides, they are also here to express their wishes to Fujian Channel for their anniversary. Michelle Ye and Sun Fei Fei are recognized beauties, with both of these gorgeous girls present together, the crowd and fans were definitely very lucky.

The male dressed female character 'Shang Guan Hai Tang' in 'World's Finest', 'Zheng Siu Yu' in 'Golden Faith'… if she hadn't been so determined to marry into a wealthy family, Michelle may have probably be a super star by now. The entertainment industry has always been full of rumors. Michelle Ye who has been in the industry for seven years has never been free of rumors. Having had a relationship with Benny Chan, a neither too true nor too fake relationship with diving prince Xiong Ni, being rumored to be with Vicki Zhao's ex-boyfriend etc list of wealthy heirs…

Last night, the impression Michelle Ye gave reporters was in fact a totally obedient girl image, very similar to the character Jian Xiao Dan she played in 'Jiao Yi Sheng Ma Ma'. Facing the harms of her younger sister, with her loved ones leaving one after another… she remains strong. Michelle told reporters: "I have exceptionally many crying scenes in the series, crying up to ten scenes in a day."

When asked about her love relationship, Michelle did not answer directly, she expressed: "I don't like those exciting kind of relationship, full of obstacles, I like simple, long lasting and sweet love! Leave those obstacles and suffering to Jian Xiao Dan…"

With her model bodycut, plus her lively personality, Sun Fei Fei has lots of support from audience in Fuzhou.

Sun Fei Fei told reporters: "I am from Xi An, but left home at 11 to learn dancing in Beijing. I have fate with Fuzhou, the dancing class I was in is actually Fuzhou dance class, there are also some popular actress among my classmates. However when I graduated, I signed contract with a filming company and began filming my fist series, most audience got to know me from that film."

A beautiful female artist will be framed with many accusations, some say Sun Fei Fei is 'artificial beauty' and has underwent beauty surgery in korea. Some Media even claimed Sun Fei Fei is addicted to listening to Andy Lau's song, her ambition is to make up for Andy, to be his assistant. Sun Fei Fei did not avoid one bit towards this questions, she revealed the so-called before and after 'surgery' photos is merely the more obvious difference sides of her in two series. About Andy, she said she merely replied to reporters question if she has an idol, which she said to be Andy.

In 'Jiao Yi Sheng ma Ma', Sun Fei Fei plays the bad daughter Jian Yuan Yue. She was abandoned by her mother when she was just a baby but later adopted by a kind hearted woman. This family have another daughter who is almost her age but of opposite personality. After discovering her birth background, she lost rationality and started to go against her sister in all ways possible… Sun Fei Fei said, "I have been playing the good character in the past, I keep being bullied, this time around, I finally get the chance to bully others." 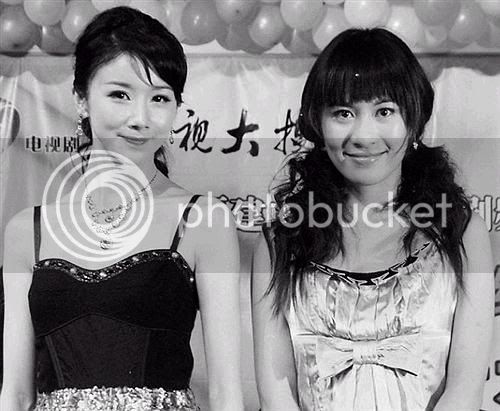